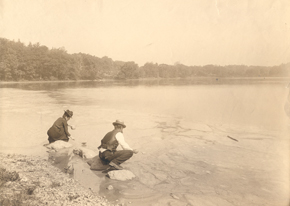 My current research is a biography of Ellen Swallow Richards, the first woman to graduate from and teach at the Massachusetts Institute of Technology. Trained as a chemist, Richards broke into the male-dominated fields of science and technology. She was reform-minded and became a key player in early nutritional science, mineralogy, mining engineering, the home economics movement, environmental cleanup, and public health from 1870 to her death in 1911.

In addition to finishing my dissertation, I’m working on an article about an 1879 MIT summer field school to Nova Scotia. Both male and female students attended the summer school and studied mineralogy, mining engineering and metallurgy with the same pedagogy: both male and female students went down into the mines, climbed rock formations and toured mining towns. Ellen Richards and her husband, MIT mining engineer professor, Robert Richards, served as chaperones.

I am also working on a digital documentary edition of the Ellen Swallow Richards’s Papers. This work has been funded by an NHPRC/Andrew W. Mellon Foundation Planning Grant.